(With credit to David Greer for the headline)

Kentucky’s infamous dachshunds, Woody and Chloe, are making their rounds to schools, libraries and even a water treatment plant as part of the celebration of the 2017 KPA Fall Chapter Series, ‘Dog Paddling Across the Bluegrass.’

With the coordination by LaRue County Herald-News publisher Allison Shepherd, and Larry Hensley, publisher of The Advocate Messenger in Danville, community events were organized the past week. More than 300 students turned out at the water treatment plant in Danville to spend time with the Kentucky’s most famous pups and then at Hodgenville, with fewer attending, students had a chance for some one-on-one time with Woody and Chloe.

The Advocate Messenger featured a story about the event on its front page and had several pictures. Extra copies of the paper were printed so that each student who had attended the event would have a personal copy.

From Leigh Anne Florence — Last Friday night, the LaRue County Herald teamed up with the LaRue County Public Library and hosted an evening with Woody and Chloe. It consisted of a Meet & Greet, Pictures with the Pups, and a presentation about the serial story. It was such a neat event.

Allison Shepherd, publisher, and Doug Ponder, editor, pulled out all the stops. They even had the LaRue County 4-H Kayak and Canoe Club bring out kayaks and canoes to put on stage. The attendance wasn’t huge but we were anticipating a smaller crowd – especially since the LaRue County High School Football Team was in a home play-off game for the first time in – well, maybe ever. The smaller numbers made it so everyone who attended had plenty of one-on-one time with Woody and Chloe. Oh – and the mayor was there. Not everyday the mayor comes to a Woody event.

Three quick highlights I want to point out. And I don’t mention these for our glory at all, but rather to show you what an impact the KY Press Association and the local newspapers – particularly The LaRue County Herald in this case – are having on our youth by running a serial story geared on their level. 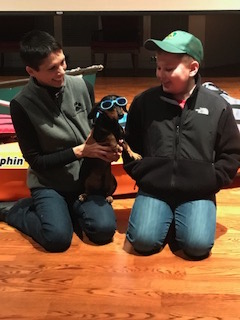 1. A grandmother brought her grandson to the event. After the presentation she told us that her grandson didn’t enjoy school or reading. When she saw Woody’s story she brought it to his attention and had him read it each week. She says it has made a difference in how he feels about reading and school. This kid knew everything about the story. I would ask a question from the story, he would know it. I would put an illustration on the screen and he would immediately get excited and start telling me what happened in that chapter. It was so fun to see his excitement and just as enjoyable to witness his grandmother’s joy. 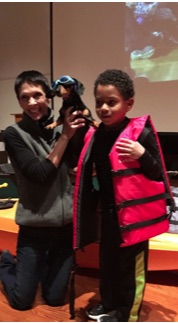 2. This past July we did a program at the LaRue County Library and met a little boy. On Friday morning I received an email from the mom with a picture of her and Woody from this summer. She said the little boy’s dad had died in August and she was bringing him to the event to see Woody. She explained he hadn’t talked much since his Dad passed. At the event, she took a few more pics of Woody and her son. Ron and Chloe were busy with talking to others and didn’t get to snap the picture with our camera so I gave her my card and asked her to text them to me. Check out her text that she sent with the picture: 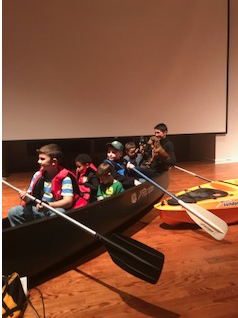 3. Finally, at the end of the presentation we put all the kids in the boat. As we were in the boat talking, I asked how many of them had been in a boat before. None of them. So for the first time ever, they were sitting in a canoe due to Ky Press Association and their local newspaper. A canoe on stage – but still nonetheless a canoe.

Have a great day! In the words of Woody, “Work and Dream like a BIG DOG!”

LA and the Gang

Message to Scott Johnson, husband of KPA Past President Kriss Johnson. He is the ‘voice’ of Woody on the podcasts:

The Advocate Messenger in Danville put together an incredible event yesterday where about 300 kids went to the Danville Water Treatment Plant for a tour and then a session with Woody and Chloe. By yesterday afternoon we had received countless emails. Woody replied to each of them but I wanted to pass this one on to you so you can see just how much the kids love the podcast! We heard several comments yesterday about how they enjoyed listening to Woody read the story. Some of them had not heard the podcast so we encouraged them to go online and listen.  Anyway, knew you would enjoy this email. Also, one teacher asked Candi how she could get a copy of the previous stories. So all of our teamwork – dating back to the first story – definitely pays off and Kriss, you are still getting return on all your hard work from years past!